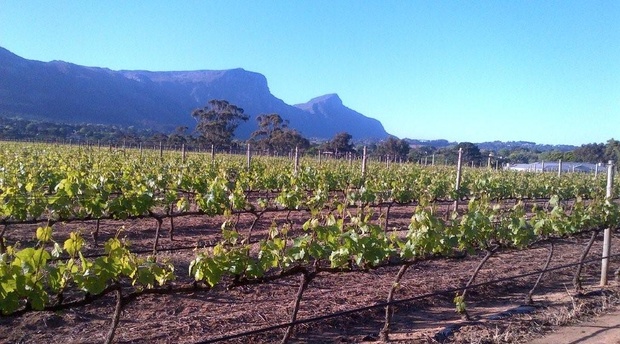 In 1685, during an annual visit to the Cape, Hendrik Adriaan van Rheede tot Drakenstein granted the grounds of Groot Constantia to Simon Van Der Stel, the VOC (Dutch East India Company) Governor of the Cape of Good Hope.

Van der Stel built the house and used the land to produce wine as well as other fruit and vegetables, and for cattle farming. Following Van der Stel's death in 1712 the estate was broken up and sold in three parts: Groot Constantia; Klein Constantia; and Bergvliet.

In 1779 the portion of the estate including Van der Stel's Cape Dutch-style manor house was sold to the Cloete family, who planted extensive vineyards and extended and improved the mansion by commissioning the architect Louis Michael Thibault. The wine cellar was added by Cloete in 1791. The house remained in the possession of the Cloete family until 1885, during which period the estate became famous for its production of Constantia dessert wine.

In 1885 Groot Constantia was purchased by the government of the Cape of Good Hope and was used as an experimental wine and agricultural estate. Following a disastrous fire in 1925 the house was extensively restored.

In the year 1925 the manor house completely burnt down. Funds were raised to reconstruct it to its original Cape Dutch splendour.

In 1969 the manor house became part of the South African Cultural History Museum, and in 1993 the estate passed into the ownership of the Groot Constantia Trust. The exhibition in the house is managed by Iziko South African Museum, and is particularly focused on rural slavery and the life of slaves during the early Cape colonial period.

Today, other estates have joined Groot Constantia to form the scenic Constantia wine route. These estates include: