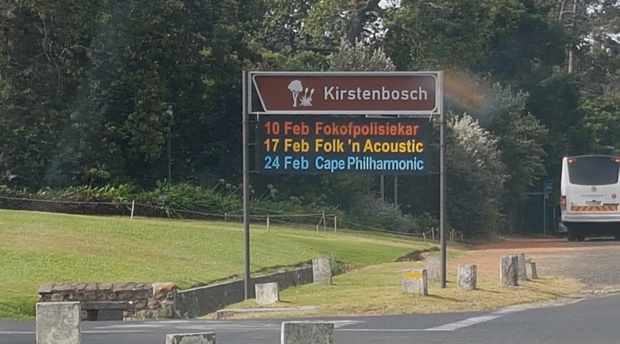 A Botanic Garden is Born

Harold Pearson came to South Africa in 1903 to fill the newly established chair of Botany at the South African College. He saw the need for a botanic garden in Cape Town and set about achieving that goal. Pearson had decided that the eastern slopes were the most suitable site for the garden and was thinking it could be at Grootte Schuur Estate, which would then be linked to the university that was to be established there. But in 1911 Neville Pillans, a young botanist and enthusiastic gardener who knew Kirstenbosch well and saw its possibilities, brought Pearson to see it. They drove up Rhodes’ Avenue in a Cape cart, stopped at the main gate, Pearson got out, surveyed the landscape and exclaimed, “This is the place!”

In May 1913 the Government set aside the estate of Kirstenbosch for the establishment of a National Botanic Garden at Kirstenbosch and agreed to contribute £1000 per annum. The Botanical Society was formed on 10 June 1913 and held its first general meeting on 31 July 1913. Its aims were to encourage the public to get involved in the development of Kirstenbosch, to augment the Government grants, to organise botanical shows, and to enlighten and instruct members on botanical subjects. The Garden was to be controlled by a Board of five Trustees, three appointed by the Government, one by the Municipality of Cape Town and one by the Botanical Society. The Board held its first meeting on 16 June 1913, and appointed Pearson as Honorary Director (with no salary) and J.W. Mathews as Curator. A Secretary, a Ranger and a Gardener were also appointed. On the 1st of July 1913 the Kirstenbosch estate was handed over to the Board of Trustees.

The founders of Kirstenbosch were confronted with a neglected, overgrown farm, a ruined homestead, hordes of pigs, thickets of weeds and extensive plantations of alien plants. Much of the early work involved eradicating the aliens and clearing the land of weeds, and constructing pathways for easy access.

Development started in the Dell area and in the first ten to fifteen years many of the principle features of the garden were established. The main lawn was cleared and planted, hundreds of cycads were planted in the Cycad Amphitheatre, the rock work along the Bath stream and stone work in the Dell and the Cycad Amphitheatre was completed, Col. Bird’s Bath was restored, the Main Pond was excavated, Mathews’ Rockery and the Koppie were built, the Protea Garden, Erica Garden and Arboretum were begun, and the living plant collections were being built up.

In the early days, and indeed for the first 50 or so years, most of the work was done manually, using trolleys, mules, carts and crawlers. Today, we take machines and mechanisation for granted. The topography of Kirstenbosch is challenging for gardening, and for moving or placing rocks. Since the beginning, local stone has been used for cobbling, curbing, dry stone walls, rockeries, etc. and it has become an outstanding feature of the Garden. The high standard of the work is a testament to the skill and talent of the staff responsible, who have made a significant contribution to Kirstenbosch.

There were many hardships in those early years and funds were severely lacking. The First World War happened, causing the Government grant to be reduced and leaving only one gardener on duty. Additional income was earned from the sale of firewood and acorns (for pig food), and various economic plants were cultivated and sold.

A severe blow to the Garden was the untimely death of Professor Pearson in 1916. He is buried in the garden. Read more about Harold Pearson and see his grave. The second Director, Robert Harold Compton, arrived in 1919, and he and the Curator, J.W. Mathews, were responsible for an enormous amount of development.

The beautiful garden we have today is due largely to the foresight of its founders, the commitment and dedication of the staff during the early years, and the substantial support of the Botanical Society and its members over the years.

"STAY FOR THREE, PAY FOR TWO"

View   WINTER SPECIAL
"STAY FOR THREE, PAY FOR TWO"
STAY FOR 3 PAY FOR 2 !!
View Offer
Continue to our website